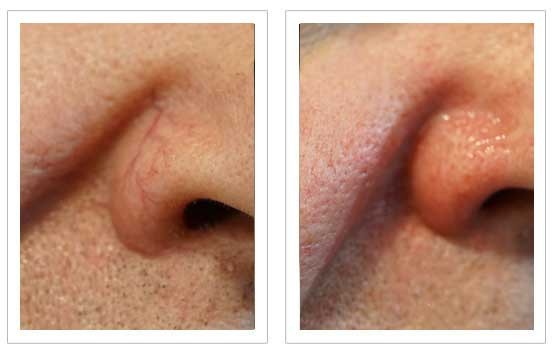 Telangiectasia is the medical name for what most people refer to as spider veins, red veins or thread veins. These broken blood vessels usually occur on the face but can sometimes occur on the legs. Red veins are enlarged blood vessels that occur just beneath the surface of the skin and are frequently web-shaped in appearance and described as spider veins, particularly on the legs.

They don’t cause any harm but some people find their appearance unsightly.

There are many reasons why people get broken blood vessels, and they can appear at any age, to any person. Contributory factors include injury, exposure to the sun and excessive alcohol consumption.

Those most at risk will likely have a genetic link, suffer from rosacea or work outside without sufficient protection from the sun. People who have hay fever have an increased chance of being susceptible to thread veins around the nose due to additional pressure in this area.

Extreme changes in weather can also affect circulation and cause broken vessels to burst causing a spidery appearance under the skin.

Hormonal influences such as pregnancy and menopause could also be a cause, although those related to pregnancy often disappear after giving birth.

These are not the only reasons that thread veins can occur as there are many other contributing factors such as smoking and lifestyle.

How can I prevent thread veins on my face and legs?

There are a few ways to reduce the problem once you start noticing the signs of thread veins. You should always use a good topical antioxidant containing vitamin C in the form of drops, with a minimum of 10% – 15% followed by a sunblock factor 50 every day. It is also worth considering supplements such as vitamin C which is an essential vitamin for healthy skin.

The face can be sensitive to excessive heat, and we advise using warm, or even cold water, rather than very hot, when washing the face. Avoid other sources of heat including saunas or steam rooms.

To prevent further outbreaks, limit sun exposure and high temperatures.  Avoid food and drinks such as spices, caffeine and alcohol which can cause blood vessels to expand and break.

Removing spider veins on a face or legs

There are many options available to treat broken veins, and it is just a matter of finding out what would work best for you and your specific issues.

Retinoid creams are often the first port of call for many different skin issues. They help increase the health of the skin and although they can sometimes be drying, often reduce the visibility of spider veins.

There are also various clinical treatments which provide immediate results. Veinwave® is a specific treatment which offers an instant and safe treatment for red veins.  Using thermocoagulation, which is clinically proven, it is relatively painless and does not use a laser, intense pulse light or injections.

Veinwave involves introducing a fine needle to the vein, and in most cases, this will cause it to disappear although sometimes it requires more than one treatment.  It can be used on the face with particularly good results and also in combination with sclerotherapy for veins on the legs.

Thermocoagulation works by gently joining the two walls of the vein together using a high-frequency wave producing a thermal lesion, while also protecting the skin.

Can red veins re-occur after treatment?

Once a vein has been successfully treated; it cannot come back but, it is possible for new thread veins to appear, and these, too, can be addressed.

What happens if you leave spider veins?

Spider veins are usually harmless and have no symptoms other than appearance, which is when some people want to deal with them for purely cosmetic purposes.

How successful is the VeinWave treatment for spider veins?

Results are usually immediate but may require more than one treatment.  It is virtually painless and can be carried out quickly with a walk-in walk-out appointment.

Instant results are available in a simple and affordable procedure which can be used on other areas apart from the face such as legs and the inside of knees. Sclerotherapy is generally recommended for broken veins on the ankles. Generally, we find that legs require more than one treatment and may need to be combined with treating the underlying varicose veins.

Join our mailing list to receive the latest news, promotions and updates from the clinic.
Thank you for signing up to our newsletter, we look forward to updating you in the near future.

A New You
Oops! Something went wrong while submitting the form.

Professional consultation to advise and guide you.

Get expert advice at a time to suit you.
book onlinecall the clinic

Following the latest announcement from the PM, we just wanted to take a moment to update you.

We will be shutting our doors for the majority of treatments and procedures, for the foreseeable or unless otherwise notified.

However, we will continue to see clients when the treatment or procedure is for a medical reason or for the person's wellbeing. Please note this will be decided on a case by case basis over the telephone or zoom. Our surgeons have also confirmed that they will still continue to see private cases.
⠀
If you have an appointment with us in the clinic, please bear with us as our team works to contact everyone. For all new clients we are very well prepared and skilled at what we do, so we will continue to do consultations for new and existing clients, virtually (via zoom or telephone).
⠀
You can still order skincare products via private message on social media or by emailing us at enquiries@anewyou.co.uk
‍
Lastly, thank you (again!) to all our amazing clients for your continued support throughout this period! We can do this together!
⠀
We look forward to seeing you again soon.
‍
The A New You Team 💜
Following the latest announcement from the PM, we just wanted to take a moment to update you.

The A New You Team 💜
View announcement
